The Island of Wight is well known as a place to go on Holidays or even to their famous festival but… did you know they’re carrying out some really green and interesting projects?

First of all, Ecoisland, a project launched by David Green, which main objective is bring pioneering alternative fuel technology to the Island of Wight. The idea is using the isle as a pilot project area for electric and hydrogen powered vehicles. Electric car charging in London – By frankh, via Wikimedia Commons

Both vehicles are powered with electricity and hydrogen respectively. The first one takes electricity from Charging stations (or even solar powered garages!) and stores it in batteries. The fuel costs for electric cars is low, or even free if the car is charged in one of the publically available free electric car charging points in the UK.

The second ones, hydrogen powered cars, do the same process, but using hydrogen as its onboard fuel.

If this goes on, the Island of Wight could be the first place in the UK where hydrogen powered vehicles are tested. On the other hand, plans for a trial of electric vehicles could include the revolutionary French-made Mia. 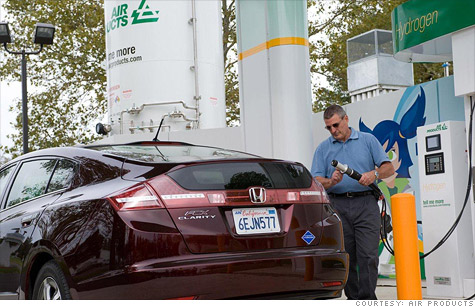 On the other hand, in addition to these projects, Ashey-based Pure Green Energy has just fitted almost 400 solar panels to industrial units in Newport’s St Cross Business park — the largest roof-mounted solar energy generator on the Isle of Wight to date. The company estimates the systems will produce an excellent financial return for the owners over a 25-year period under the government’s Feed-in Tariff scheme. Under that scheme, users can dramatically cut down their energy bills and, if they generate any surplus electricity, they can sell it back to the National Grid.