Solar panels can be mounted in lots of different ways, the type of mount you can use is usually determined by the type of installation and the land available for the equipment to be used in.

Most residential installations will make use of the homes roof space and be fitted directly onto racks on the roof, however businesses and places like farms etc which have more flexibility could have a stand alone installation.

There are many available mounting systems, below we will run through some of them, but before we do it’s important that you understand why the mounting points, orientation and angle of the solar panels is so important.

Solar panels have small crystals which convert photons from the suns rays into a current, then an inverter (also part of a normal solar system), converts the current into an AC current, for use in the home. 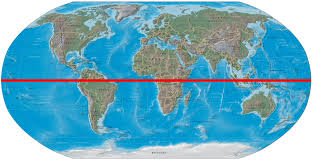 World map with the equator line

The orientation, direction and angle of your panels is hugely important, it’s also important you understand why; Our Earth is divided up into the Northern Hemisphere and the Southern Hemisphere by the Equator, the Equator is 0° and is an imaginery line on the Earths surface equidisant from the North Pole and South Pole. The UK lies in the northern hemisphere. The Sun in its seasonal apparent movement across the sky, passes directly over the Equator twice each year, at the March and September equinoxes, at the Equator on these dates the rays of the Sun are perpendicular to the surface of the Earth.

Places along the Equator see the quickest rates of sunrise and sunset in the world. They are also the only places in the world where the sun can go directly from the zenith to the nadir and vice versa. These places also, theoretically can have the most sunshine hours a day on Earth, with up to 12 hours each day, all year round. Although this is sometimes obviously impeded by local weather.

Now we’ve grounded you on a bit of the geography, we can explain why its important. The orientation of your panels in the Northern Hemisphere, will always be optimised at due south. This is because the Equator line is South of the Northern Hemisphere. Your panels will receive the most sun light hours due south in the Northern Hemisphere and vice versa if you are in the Southern Hemisphere. The angle of your solar panels is also very important, the angle will be optimised for the average zenith angle of the sun over a year, to maximise solar ray catchment for the solar panels and thus maximise potential energy throughput and profitability. The angle for the UK is usually between 30-45° with most installers optimising somewhere in the middle.

The mean angle is an average of the whole year, but the real optimum could be found by tracking the sun each day of the year, although most fixed mount installations cannot achieve this, there are methods which focus on tracking the sun all year round, optimising the system every single day.

We discuss some of the mount options available below: 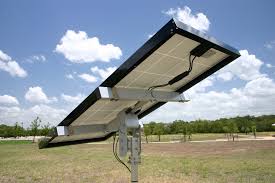 Example of a Solar Tracker

Fixed racks hold panels stationary as the Sun moves across the sky. The fixed rack sets the angle at which the panel is held and is done at the point of installation. Tilt angles equivalent to the installations latitude are common. In the UK it is likely to be somewhere between 30-45°

Ground mounted solar power systems consist of solar panels held in place by racks or frames, which are then attached to ground based mounting supports.

Ground mounting can invariably be done by any imaginative technique, but commonly the following are used:

Roof mounted solar panel systems consist of solar panels held in place by racks or frames attached to the roof based mounting supports. These are amongst the most common type of residential install in the UK and indeed amongst most other countries.

Roof based mounting supports could include:

When considering what type of mount you are going to use for your installation in the UK consider the following: